Lambeth Palace Library and the Church of England Record Centre regularly embark on new projects and acquire and catalogue new material, from rare books and manuscripts to modern publications.  These posts provide a brief update on some of our latest acquisitions, projects and upcoming events, to keep you up-to-date with our most recent news.

Enjoy reading one (or more!) of our recently acquired new books. Highlights include:

Lambeth Palace Library also collects a variety of magazines and journals. You are very welcome to visit the Reading Room to consult these too. Some of our recently received titles include:

We also receive the following papers and magazines weekly:

Every first Friday of the month until September, 12 noon to 3pm
Next Open Day: Friday 2 August

An opportunity to visit the Palace’s beautiful gardens and see the progress of the new Library building! Refreshments and entertainment are provided in the garden and there will be plants for sale. The 17th century Great Hall will also be open throughout the Open Days, with a chance to view displays of some of the Library’s collections. Do come along and bring your friends and family!

There is an entrance fee of £5, which will go to a chosen charity each month, and there is no need to book.

As of July, the Library project remains on time and on budget. The Archbishop topped out the building in May.

The brickwork is nearing completion and is gradually being revealed as the scaffolding comes down.

Over the summer and Autumn most of the work is concentrated on the inside of the building as all the mechanical work progresses inside.

Staff are now heavily involved in planning for the big move of all the archives from the Library and CERC which will be taking place between June to December 2020.

Clare Brown awarded The Lanfranc Award for Education and Scholarship

The Library is delighted that Mrs Clare Brown, Archivist, was awarded The Lanfranc Award for Education and Scholarship by Archbishop Welby at the Lambeth Awards 2019, for her work in guiding readers through the archives of the Church of England, and for her exhibitions and scholarly expertise in support of Lambeth Palace Library and three Archbishops of Canterbury. In April, we bid Clare a very long and happy retirement after seventeen years of service at the Library!

Clare’s contribution over the years is too vast to summarise briefly, but we hope to give a sense of her many accomplishments. On joining the Library, Clare completed cataloguing of the papers of Archbishop Ramsey, and then led cataloguing of the Council of Foreign Relations (CFR) archive. She led work on the collaborative projects on the Library’s important collection of Greek manuscripts, with an exhibition in 2006 and the launch of the catalogue in 2016. She contributed to understanding of the Canterbury Archbishops’ Registers alongside work undertaken by the Borthwick Institute on the York Registers. Her knowledge of the history of ecumenical relations contributed to displays for visitors to the Archbishop from other churches, and her extensive knowledge of the collections and of Church of England history have benefited many Library readers and NCIs colleagues over the years. This is evidenced, not least, by the amount of enquiries Clare answered during her time at the Library – almost 3,700!

We will all greatly miss Clare’s incredible knowledge, helpfulness, her willingness to share her expertise with Library readers and colleagues alike, and especially her sense of humour.

Papers from 1988 have been released for research, including some 500 files from the papers of Archbishop Runcie and further material on Anglican-Roman Catholic relations from the records of ARCIC II. Descriptions can be searched on the Library’s online archives catalogue.

Further newly-catalogued material includes records of the Lambeth Diploma and Vacation Term for Biblical Study, two initiatives founded in the early 20th century to provide theological and scriptural training for women. Library staff are also adding detail to descriptions of various series of news cuttings and photographs relating to Archbishops Benson (cartoon pictured below), Davidson, Lang and Fisher, which complement correspondence and other papers in the main series. Photographs of Lambeth Palace and garden by Sue Snell are also now catalogued.

An annotated Bible belonging to John Taylor Smith, Bishop of Sierra Leone, was donated to the Library. The Library also received a set of playing cards produced by the Mothers’ Union.

Watercolours from the Library collections can now been seen on the new Watercolour World website.

Recent blog posts have covered a printed work on music from the Sion College collection; a further report on records of the Court of Arches; and a conference on Anglo-Saxon manuscripts.

A digitised version of Herbert Bosham’s life of Thomas Becket incorporating folios from the Library’s MS 5048 detached from the parent manuscript held in Arras is now available. 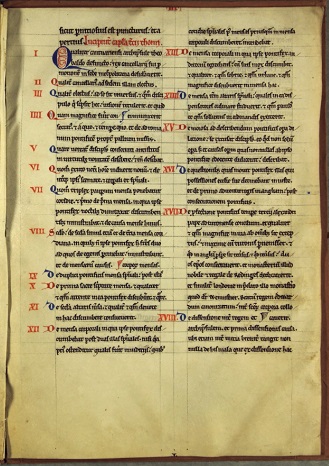 The 100th anniversary of the Church Assembly, predecessor of General Synod, occurs in 2019. Aside from the main archive held at the Church of England Record Centre, there are further voluminous sources in the Library collections.

An edition of the household accounts of Archbishop Laud has been published; the original document is held at the National Archives, but complements sources relating to Laud in the Library collections. Readers may be interested in a Salvation Army blog post on the history of Christianity in China; the Library also holds material on the church in China.

In the Conservation Studio

Earlier in the year, a group of students from the Consortium for the Humanities and the Arts South-East England (CHASE) visited the Library as part of their ‘Material Witness‘ training programme, which examines physical objects in the digital age. The visit was organised by Teresa Lane, PhD student at the Courtauld Institute of Art, who recently completed a six-month CHASE internship working on the Library’s illuminated manuscripts. It gave participants a behind-the-scenes look in the conservation studio and an opportunity to learn about the different approaches and techniques involved in preserving fragile books.

Lara Artemis, Senior Conservator at the Library, led the sessions on medieval manuscripts, examining their materiality and chemistry, as well as their history and provenance. The group were shown the stunningly illuminated 13th-century Lambeth Apocalypse (MS 209) – one of the Library’s treasures – and looked at the kinds of pigments used by the artists. The students even had a go at mixing pigments and painting their own illuminations on vellum afterwards!

The photographs above are taken from the Material Witness blog about the student’s visit to Lambeth Palace Library, which gives plenty more fascinating insights into manuscripts and their conservation.

In other news, we continue to make strides in our boxing and preparing the collections for the move. We’ve now completed around 25,000 boxes for vulnerable items in the collection, including completing the job of cleaning, measuring, boxing and organising the vulnerable Sion College Library collections stored in the Blore, one of our Library storerooms.

Fellows and members of Sion College celebrated its Founder’s Day at Lambeth Palace on Tuesday 9 July. This year’s event included a lecture by Baroness Manningham-Buller, former Director General of MI5, who spoke on the topic of “Intelligence and Ethics”. Evening prayer in the Chapel was followed by a drinks reception in the Great Hall where attendees were able to view an exhibition of some of the newly catalogued items from the Sion College collection, now housed in Lambeth Palace Library. Also on display were books and manuscripts relating to the lecture’s theme, including Reginald Scot’s Discovery of witchcraft (1654) in which the author denounced the prosecution and torture of those accused of witchcraft as un-Christian and irrational, and a 1584 caricature of Thomas Norton, whose ruthless and enthusiastic punishment of English Catholics led to his being nicknamed the “Rackmaster-General”. 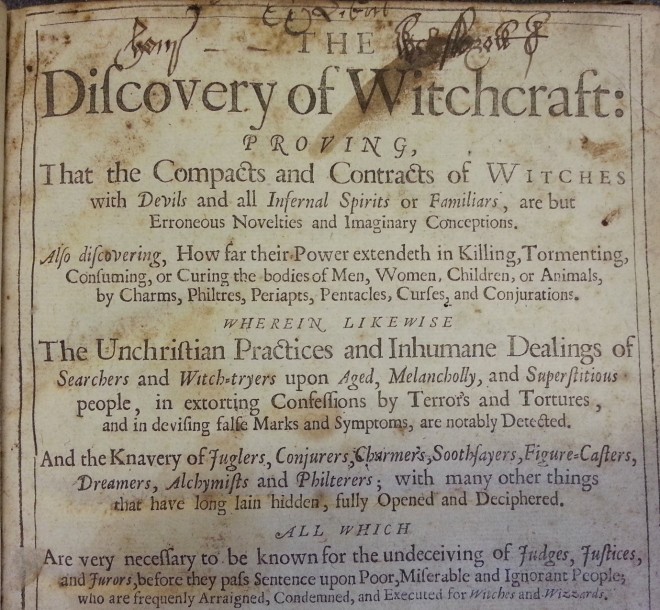 Don’t forget – you can also keep up-to-date with our news and events, and enjoy glimpses of some of the treasures in our collections, by following us on Facebook, Twitter and Instagram.